We condemn Israel. So why the silence on Syria?


When Israelis kill Arabs there is outrage. But Assad's brutal campaign has cost 30,000 lives and there've been no protests 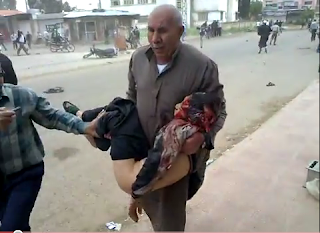 "....They say nothing because there is no pressure on them to say anything. Here and abroad, there is virtual silence, save for the desperate pleas of a few Syrian expats and yesterday's cry for humanitarian help from the Turkish foreign minister. We know the facts, and we know what Bashar al-Assad has done since demonstrators took to the streets to protest against his rule 19 months ago. He and his forces have pursued a campaign of the most chilling brutality, using fighter planes to bomb civilian neighbourhoods, capturing, starving and torturing children as young as six, according to Save the Children, and racking up an estimated death toll of 30,000 victims.

People know all this but stay mute. Not that they should be demanding immediate military action. After Afghanistan, Iraq and Libya, people are justifiably both weary and wary, with many regarding action in Syria as a practical impossibility. I understand that. But what I can't comprehend is the lack of public pressure on those doing the actual killing – starting with the Assad regime. Instead, public opinion seems utterly disengaged, unbothered by the slaughter under way in Aleppo, Homs and Damascus.

There are no mass demonstrations outside the Syrian embassy in London. The story is rarely on the front page or on the TV bulletins. Even when there is a shocking atrocity, such as the Daraya massacre of up to 400 people in August, it makes only a fleeting impact. There is no Disaster Emergency Committee appeal......

There is no such clamour now. The Stop the War Coalition is not summoning thousands to central London to demand an end to the fighting, as it did then. On the contrary, its statements are content simply to oppose western intervention – of which there is next to no prospect – while politely refusing to condemn Assad's war on his own people. Caryl Churchill has not written a new play, Seven Syrian Children, exploring the curious mindset of the Alawite people that makes them capable of such horrors, the way she rushed to the stage to probe the Jewish psyche in 2009. The slaughter in Syria has similarly failed to move the poet Tom Paulin to pick up his pen. Apparently, these Syrian deaths are not worthy of artistic note. The contrast has struck Robert Fisk, no defender of Israel. He puts it baldly: "[T]he message that goes out is simple: we demand justice and the right to life for Arabs if they are butchered by the west and its Israeli allies, but not when they are being butchered by their fellow Arabs."......."
Posted by Tony at 4:00 AM