Denial Is Slipping Away as War Arrives in Damascus 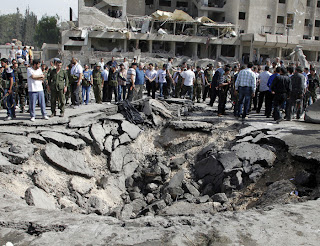 ".....War has come to Damascus. Not on the scale of Aleppo or Homs, at least not yet. But the difference from just a few months ago is unmistakable. With sandbagged checkpoints every half-mile and soldiers methodically searching vehicles for weapons, simple movement is becoming impossible.

“Where is Damascus headed? Are we the next Aleppo?” Rifa asked a few days later. “How soon before our city, our markets, are destroyed?”

This is the center of Bashar al-Assad’s power, the stronghold he tried for months to shield from a popular uprising that has inexorably been transformed into a bloody civil war. As his troops battled insurgents all around the country, Mr. Assad was determined that here, at least, he would preserve an air of normalcy, of routine, of certainty that life would go on, as it had before.

Such illusions are no longer possible. The reality of war has crept into daily life, and there is a sense of inevitability. Even supporters of the government talk about what comes next, and rebels speak of tightening the noose around this city, their ultimate goal......"
Posted by Tony at 4:07 AM