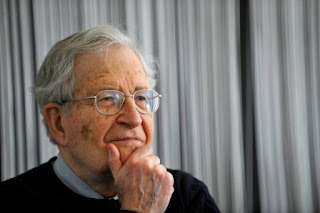 "GAZA CITY, Palestinian Territories — Jewish-American scholar and activist Noam Chomsky reportedly called for an end to Israel's siege of Gaza, on his first ever visit to the Hamas-ruled enclave on Thursday.
Chomsky, who was in the Gaza Strip for a conference at the Islamic University, called "to end the Israeli siege on Gaza," a member of Gaza's legislative council and head of the university's administrative board, Jamal al-Khudari, told AFP.....


On Saturday, Chomsky was to deliver a speech on the Arab Spring and the future of foreign policy in the region. He will also meet with NGOs, especially human rights groups, Khudari said.
"We organised a programme for him to tour refugee camps."
The Palestinian lawmaker noted Chomsky, travelling with an academic delegation, coordinated his entry to Gaza through the Rafah crossing with Egyptian authorities.
Chomsky is a professor of linguistics at the US Massachusetts Institute of Technology and a prominent critic of American foreign policy. He has frequently spoken out against Israel's occupation of the Palestinian territories."