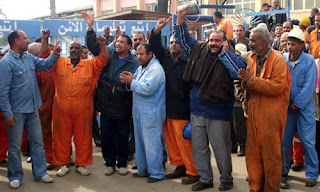 ".....In the four decades since former president Anwar El-Sadat announced his ‘Infitah’ (Open Door) economic policy, private capital has flooded into Egypt on the back of measures that promoted the country as an owner-friendly, low-wage investment destination. Firms enjoyed cheap land, tax holidays and subsidised energy while the state repressed union activity and eviscerated labour standards.
Political economist Amr Adly says market liberalisation and neoliberal economic policies were a boon for foreign corporations and wealthy Egyptians, but the resulting unemployment, corruption, and uneven distribution of wealth were primary factors behind the uprising last year that toppled president Hosni Mubarak.
“The economy was growing at seven or eight percent before the revolution, but there was no trickle down effect,” Adly told IPS. “Wages in many sectors lagged far behind inflation.”.......


But analysts say the new regime, much like its predecessor, wants to keep workers contained and controlled.
The Muslim Brotherhood, the Islamist group from which Egypt’s new president hails, has extensive business interests and a long history of anti-union activities. The group’s members in government have signalled a continuation of the old regime’s economic policies – which critics say come at the expense of labour wages and security.
“The Muslim Brotherhood doesn’t want strong unions,” asserts Hadeer Hassan, a local labour journalist. “They label striking workers as ‘thugs’ and want to prohibit union plurality.”
Egypt’s new labour minister, a prominent Brotherhood member and former ETUF deputy, has submitted a draft law that would require workers in each enterprise to select just one trade union to represent them. If passed, labour rights advocates say the legislation would eliminate most independent unions, which exist alongside their larger ETUF counterparts.
“Then we’re back to the way it was under Mubarak,” says Hassan."