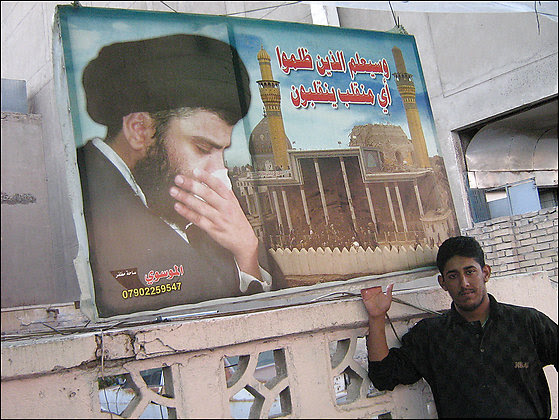 "BAGHDAD -- In the quest to create a new Iraq, two powerful clerics compete for domination, one from within the government, the other from its shadows.

Both wear the black turban signifying their descent from the prophet Muhammad. They have fought each other since the days their fathers vied to lead Iraq's majority Shiites. They hold no official positions, but their parties each control 30 seats in the parliament. And they both lead militias that are widely alleged to run death squads.

But in the view of the Bush administration, Abdul Aziz al-Hakim is a moderate and Moqtada al-Sadr is an extremist. As the U.S. president faces mounting pressure to reshape his Iraq policy, administration officials say they are pursuing a Hakim-led moderate coalition of Shiites, Sunnis and Kurdish parties in order to isolate extremists, in particular Sadr.

Hakim, who once verbally attacked U.S. policy, now senses a political opportunity and is softening his stance toward the Americans. Sadr's position is hardening. Young and aggressive, he has suspended his participation in Iraq's government and is intensifying his demands for U.S. troops to leave the country.[here is the main difference and the clencher--Tony]

Their rivalry is rising as the moderating influence of Iraq's most revered Shiite figure, Grand Ayatollah Ali Sistani, is fading on the streets of Baghdad and is being replaced by allegiance to militant clerics such as Sadr, according to Iraqi officials and analysts.

They question whether Hakim can counter Sadr's growing street power without worsening the chaos. As President Bush ponders limited alternatives in forging a new approach in Iraq, some wonder whether the United States is overestimating Hakim's ability.

The U.S. embrace of Hakim "will deepen their rivalry," said Mahmoud Othman, an independent Kurdish legislator. "And it will deepen the rifts between the United States and the Sadrists.""

IRAQIS: HANG TOGETHER OR HANG SEPARATELY!
Posted by Tony at 4:03 AM