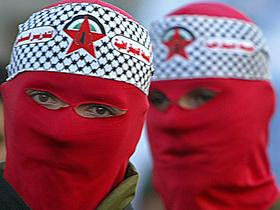 ".....It must also be noted that the ideological composition of the Palestinian leadership is truly irrelevant as far as Israel’s colonial policies are concerned, for Israel’s policy was altered little before Hamas’ advent to power in the legislative elections of January 2006, if compared to its decidedly colonial approach under Arafat or his predecessor Mahmoud Abbas. There is always a reason to brand Palestinians, always a reason of why Israel’s favored status quo must not be disturbed.

And it’s this same status quo that continues to pervade and suffocate any attempts to negotiate a just settlement to this violent and increasingly global conflict.

Amid this deliberate stagnation, the Palestinian people are left with no option but to revolt, as costly and uncertain as it has been throughout the years. Thus, it must be stated that Palestinian resistance, which for the most part has been a nonviolent and popular movement, shall continue as long as the circumstances that contributed to its commencement remain in place. In fact, Israeli oppression has crossed the traditional boundaries of daily murders and small-scale land confiscation. Under the deceptive “disengagement” from Gaza smokescreen, West Bank lands are being vigorously expropriated while Israel’s Imprisonment Wall, illegal according to the International Court of Justice decision of July 2004, is swallowing up whole towns and villages.

This reality, as history has taught us, is only a prelude to another popular Palestinian response, which is already echoing in the angry chants of destitute farmers whose lands are being effectively annexed by the encroaching Israeli wall.

Regardless of how historians choose to chronicle the Second Palestinian Uprising, it will always be remembered by most Palestinians, as well as by people of conscience everywhere, as a fight for freedom, human rights and justice. It will remain a loud reminder that popular resistance is still an option — and one to be reckoned with at that."
Posted by Tony at 8:07 AM