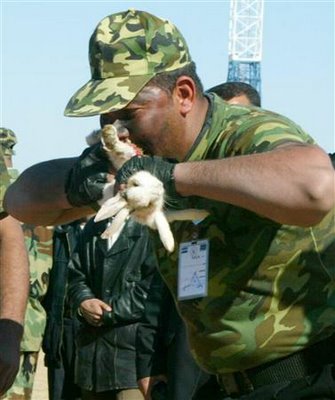 Under Saddam Hussein's rule, his feared Fedayeen militia carried out similar acts, and in one instance were videoed hunting a fox and then tearing it apart with their teeth.

Troops paraded round in shining new vehicles decked with pink ribbons and flowers, but Iraq's Deputy Chief of Staff, Lieutenant General Nasier Abadi, conceded there were problems with procuring equipment and setting up supply lines, for which the Iraqi forces still depend largely on U.S. support.

One soldier, Corporal Ali Abdul Hasan, said the army needed everything from helicopters to guns. "Some vehicles arrived with parts missing and we have old weapons. They didn't even give us pistols," he said.

The handover was largely symbolic since U.S. forces have rarely ventured into the holy city, home to the shrine of Imam Ali, whose death in the 7th century caused the great schism in Islam between Shias and Sunnis.

The province has effectively been under Iraqi security control for some time because of religious sensitivities. But its status means success there will be crucial. Continued reading.
Posted by Shusma at 5:59 PM