Hey Laura: This Is The Progress Your Husband Has Brought to Iraqi Women 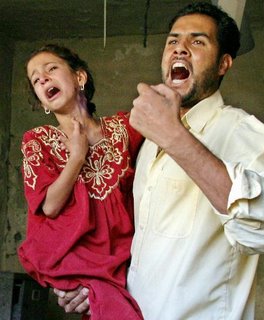 "Al-Zaman reports in Arabic that on Friday, Baghdad awoke to discover that a horrible crime had been committed. Militiamen kidnapped three coeds from Mustansiriya University, raped them, killed them, and tossed their bodies into a courtyard at al-Adli Medical School in the capital. A woman's organization complained bitterly that the Iraqi government was doing nothing to halt a building crime wave. The organization and the girls' friends among Mustansiriya U. students also blamed the Shiite ayatollahs for lending their support to the Shiite militias. (Mustansiriya University is near to Sadr City and the implication is that the kidnappers were Mahdi Army, attacking Sunni girls).

Likewise, the militias kidnapped a female teacher from Ghazaliya district, raped her, and cast her body in the street in the Shu'la district of Baghdad.

The honor of women is a key value in Iraqi society and the kidnapping and raping and killing of these female students "in the most vile manner" has enormous shock value. Historian of Iran Afsaneh Najmabadi argued that Turkmen kidnappings of Iranian women in 1905 helped weaken the legitimacy of the Iranian state and were an element in the debates of the subsequent constitutional revolution.

A member of the Student Union said that the ability to hold classes at Iraqi universities had been put in doubt and studies might well have to stop. "
Posted by Tony at 7:20 AM