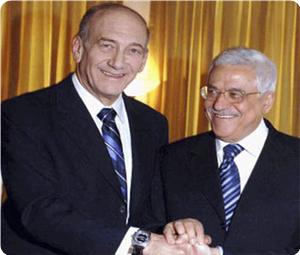 "Breaking the ice: Prime Minister Ehud Olmert and Palestinian President Mahmoud Abbas are set to meet in Jerusalem Saturday evening for the first time since they were elected to their respective offices.

The meeting, the first between an Israeli and Palestinian leader in a year-and-a-half, will take place in coming hours, negotiator Saeb Erekat told The Associated Press.

Olmert's office said the meeting would take place at the prime minister's official residence in Jerusalem."

Abbas, the Israeli puppet, by agreeing to meet Olmert in Jerusalem is conceding Israel's control and annexation of occupied Jerusalem. Even foreign diplomats avoid such meetings for fear that Israel would use that as legitimizing Israel's annexation. This shows how spineless Baby Chick is.
Posted by Tony at 9:37 AM