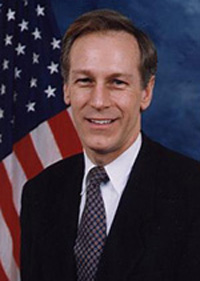 In a letter sent out to select supporters earlier this month reacting to the controversy (among certain extreme conservatives, at least) over Muslim representative-elect Keith Ellison's (D-MN) decision to be sworn in on the Koran, Rep. Virgil Goode (R-VA) warned that the U.S. must close its borders to guard against the influx of still more Muslims. In it, he also proudly recounts his retort to a Muslim student who asked him why he did not include the Koran with The Ten Commandments on his wall. "As long as I have the honor of representing the citizens of the 5th District of Virginia in the United States House of Representatives, The Koran is not going to be on the wall of my office," he says he told the student. Continue reading.
Posted by Shusma at 10:07 AM