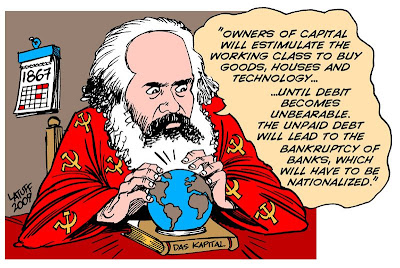 "......So why has this zombie idea - it keeps being killed, but it keeps coming back - taken such a powerful grip? The answer, I fear, is that officials still aren't willing to face the facts. They don't want to face up to the dire state of major financial institutions because it's very hard to rescue an essentially insolvent bank without, at least temporarily, taking it over. And temporary nationalization is still, apparently, considered unthinkable.

But this refusal to face the facts means, in practice, an absence of action. And I share the president's fears: inaction could result in an economy that sputters along, not for months or years, but for a decade or more. "
Posted by Tony at 8:49 AM