".......No one expects the official Arab order to contribute seriously to the drive to seek redress for war crimes, including those perpetrated against Arab citizens in other Arab countries. When there was a state of war Arab governments thought that apart from the routine of going to the Security Council, war meant taking revenge through warfare, not through wailing and laments. Later, after Arab states turned to the negotiating process and peace initiatives, they succumbed to a general impression that there was a contradiction between accusing 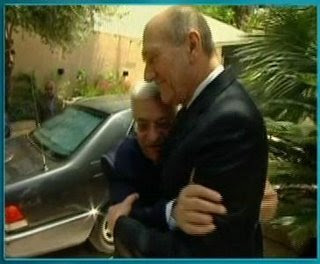 Israeli rulers of being war criminals and making peace with them. For this reason, when Arab officials refer to war crimes at all, they do so timidly and in Arabic, and then take the matter no further. This inconsistency in Arab behaviour does little to help in the arena of litigation. It somehow jars to hear Arab officials levelling charges of war crimes against Israeli officials and then having to watch one news report after another of the same officials flying off to peace conferences and shaking hands and exchanging visits with the person they accused. The world is not stupid. It is always on the lookout for those who vouch for Israel."
Posted by Tony at 3:01 PM