Feltman: Syria Can Play 'Constructive' Role in the Mideast 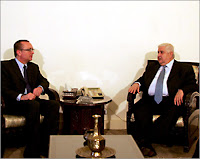 "07/03/2009 Syria can play "an important and constructive role" in the Middle East! Believe it or not, this testimony was not given by any of Damascus’s allies, however it was given by its long-time foe, USA.

Senior US envoys and top Syrian officials met in Damascus Saturday about how to defuse past tension. Jeffrey Feltman [COMMENT: Feltman is the former detested US ambassador to Lebanon, who effectively was telling Saniora what to do, day by day! He was acting as a US high commissioner to Lebanon.] said that he and fellow envoy Daniel Shapiro held the "view that Syria can play an important and constructive role in the region," after their talks with Foreign Minister Walid Mouallem and other Syrian officials........."
Posted by Tony at 8:02 AM