So Karl Marx was right after all 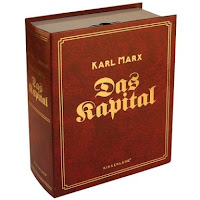 Maybe the Mail will be yelling, ‘Smash the bosses, get the worker’s Mail’

By Mark Steel
The Independent

"The sudden change is disconcerting. For years I might suggest society would be improved if we sacked these vastly overpaid bankers, and the response would be some variety of "Here he goes again".

Now if you say the same thing the response is "SACK them? I'll tell you what we should do, we should cover them in marmalade and lock them in a greenhouse full of wasps, then scour the stings with a Brillo pad. Then prick them with hedgehog spikes, smear them with fish paste and dip them in Sydney Harbour, then glue them to a pig and send them into an al-Qa'ida training camp with a letter announcing they're a work of art, never mind sack them."......

Sales of Marx's Capital are at an all-time high, and this can't just be due to the current rage against characters such as Fred Goodwin and his merry bonus. It must also be because Marx fathomed that under capitalism, boom and slump would remain a perpetual cycle, as opposed to those such as Gordon Brown, who said once an hour for five years, "We have abolished boom and bust", a theory which is now in need of a minor tweak......

But he might also dispute the idea attributed to him, that slumps make the collapse of capitalism inevitable. Because while he said SLUMPS were inevitable, he also said the outcome wasn't inevitable at all, but depended on whether the poor allow the rich to make them pay for it......"
Posted by Tony at 3:37 AM