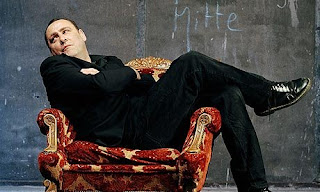 Between his firebrand political outbursts and his blistering live gigs, Gilad Atzmon has somehow found time to pay homage to his heroes. He talks to John Lewis

"A few days before I meet Gilad Atzmon, he finds himself at the centre of an international storm. The prime minister of Turkey, Recep Tayyip Erdoǧan, has approvingly cited Atzmon during a debate with Israeli president Shimon Peres. "Atzmon, a Jew himself," said Erdoǧan, "says that Israeli barbarity is far beyond even ordinary cruelty." Ever since, Atzmon has been getting 200 emails a day, his BlackBerry is constantly buzzing and his words are being debated by hundreds of bloggers around the world. Atzmon is revelling in the attention.

"A world leader quoting an artist?" he laughs. "Isn't that incredible? Not a singer, not even a fucking pianist, but a stupid fucking saxophonist! Ha!".....

It is Atzmon's blunt anti-Zionism rather than his music that has given him an international profile, particularly in the Arab world, where his essays are widely read. (He favours a one-state solution in Palestine; he concedes that it will probably be controlled by Islamists, but says, "That's their business.") It has also made him many enemies, even among some former allies. Some Palestinian activists see his provocatively anti-Jewish rhetoric as discrediting their cause, while the Socialist Workers party, which once proudly paraded him at conferences, has distanced itself from him.

"I don't give a shit, really," he says with a shrug. "The Palestinian cause doesn't belong to any one person. And I don't identify with any political party. That's the advantage the artist has over the politician. The politician, like the scientist or the academic, looks at the world and tries to tell us things about ourselves. I am an artist. I look into myself and try to tell you things about the world. We push envelopes because we look into ourselves. You don't have to listen to me. You can take it or leave it. But it's my truth.""
Posted by Tony at 9:07 AM