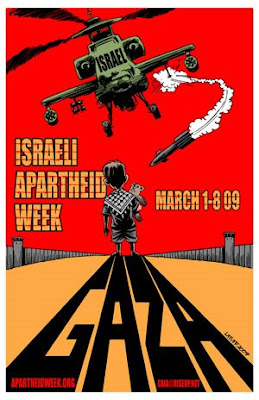 "RAMALLAH, Mar 3 (IPS) - "Standing United with the People of Gaza" is the theme of this week's Israel Apartheid Week (IAW), which kicked off in Toronto and another 39 cities across the globe Sunday.

A movement to boycott Israeli goods, culture and academic institutions is gaining momentum as Geneva prepares to host the UN's Anti-Racism Conference, Durban 2 next month amidst swirling controversy.

Both Canada and the U.S. are boycotting the Durban 2 conference in protest over what they perceive as a strongly anti-Israel agenda......"
Posted by Tony at 5:53 AM