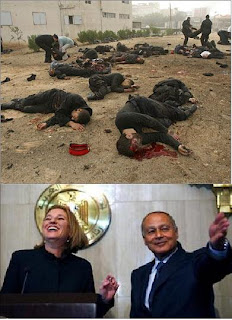 "The Leader of the Islamic Revolution says those who advocate a "pragmatic" approach toward Israel should have learned to think twice.

"By now those who advocated a pragmatic approach under the illusion of the invincibility of the Zionist regime and who succumbed to surrender and compromise with the usurpers should have realized their mistake," Ayatollah Seyyed Ali Khamenei said on Wednesday.

Addressing an international conference in support of the Palestinians in Tehran, the Leader was referring to "those who entertained hopes of a peaceful coexistence with the Zionist". [COMMENT: Does this apply to your "ally", the Rabbit of Syria, Seyyed Khamenei? How about your own "pragmatic" co-existence with the Great Satan, the protector and enabler of the Zionist state, next door in Iraq? You don't seem to mind the Great Satan next door, as part of a "pragmatic" calculation, to get rid of Saddam and to bring to power sectarian Shiites in Iraq.]

Some Arab leaders provoked outrage among the people of the Middle East by either remaining silent on the plight of the Palestinians or aiding and abetting Israel in its 60-year oppression of the Palestinian population..... "
Posted by Tony at 2:44 AM