Did Clinton sabotage a Palestinian reconciliation? 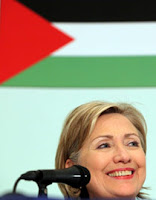 "Still reeling from the Israeli massacres in the occupied Gaza Strip, Palestinians have lately had little to celebrate. So the strong start to intra-Palestinian reconciliation talks in Cairo last week provided a glimmer of hope.

An end to the schism between the resistance and the elected but internationally-boycotted Hamas government on the one hand, and the Western-backed Fatah faction on the other, seemed within reach. But the good feeling came to a sudden end after what looked like a coordinated assault by United States Secretary of State Hillary Clinton, European Union High Representative Javier Solana, and Fatah leader Mahmoud Abbas whose term as president of the Palestinian Authority (PA) expired on 9 January......"
Posted by Tony at 6:34 AM