Iraq's Palestinian refugees back at square one 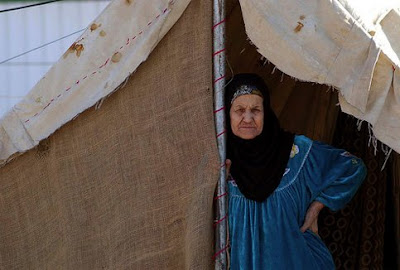 "Word is that the Palestinians will be hosted in tent-camps in the afterlife,"

"When images and news of the new border tent-camps that the Palestinian refugees from Iraq fled to after the US invasion began to spread through Arabic-language media, a concurrent anecdote began to circulate: "Word is that the Palestinians will even be hosted in tent-camps in the afterlife." The nightmare of the approximately 25,000 to 30,000 Palestinians whose families sought refuge in Iraq in 1948 is but the latest manifestation of the ongoing tragedy of Palestinian stateless refugeehood. This is a story of multiple uprootings and dispossessions since 1948 by both Israel as well as Arab host states that have turned what is known as the Nakba of 1948 into a persistent and ever-present condition that has led to, and allowed for, multiple post-1948 Nakbas......"
Posted by Tony at 5:35 AM