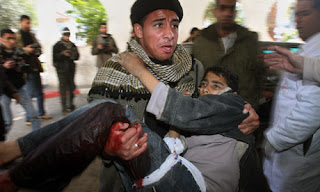 "The international criminal court is considering whether the Palestinian Authority is "enough like a state" for it to bring a case alleging that Israeli troops committed war crimes in the recent assault on Gaza.
The deliberations would potentially open the way to putting Israeli military commanders in the dock at The Hague over the campaign, which claimed more than 1,300 lives, and set an important precedent for the court over what cases it can hear.
As part of the process the court's head of jurisdictions, part of the office of the prosecutor, is examining every international agreement signed by the PA to decide whether it behaves - and is regarded by others - as operating like a state.......

The latest moves in The Hague come amid mounting international pressure on Israel and a growing recognition in Israeli government circles that it may eventually have to defend itself against war crimes allegations. The Guardian has also learned that a confidential inquiry by the International Committee of the Red Cross into the actions of Israel and Hamas during the recent conflict in Gaza is expected to accuse Israel of using "excessive force" - prohibited under the fourth Geneva convention......."
Posted by Tony at 3:30 AM