Terror Onto the Nations 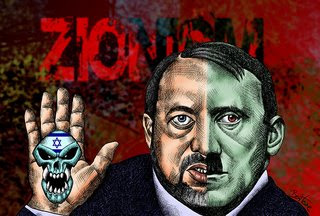 Lieberman's party, known for extremist views against Arabs and Palestinians, and for exposing agendas of massive deportation, has become the third most popular party in Israel.

On Thursday, Lieberman and Netanyahu met at the Knesset, but contents of their meeting were not made public.

Haaretz stated from a source involved in the talks that Lieberman is poised to become foreign minister, but he does not simply want to just be foreign minster; he wants full autonomy, and for this to be included in any coalition agreement with the Likud party.

Lieberman, Haaretz stated, does not want Silvan Shalom, a former foreign minister, to be in charge of talks with Syria......."
Posted by Tony at 5:54 AM