House Demolitions Unto the Nations 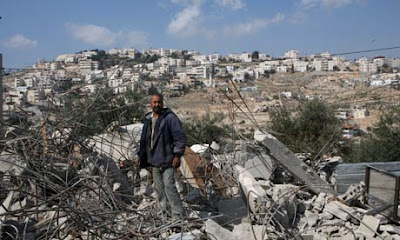 40-year-old Palestinian Mahmoud al-Abbasi stands amid the rubble of his home after it was demolished by the Jerusalem municipality in the East Jerusalem neighborhood of Silwan.

The document says Israel has accelerated its plans for East Jerusalem, and is undermining the Palestinian Authority's credibility and weakening support for peace talks. "Israel's actions in and around Jerusalem constitute one of the most acute challenges to Israeli-Palestinian peace-making," says the document, EU Heads of Mission Report on East Jerusalem.