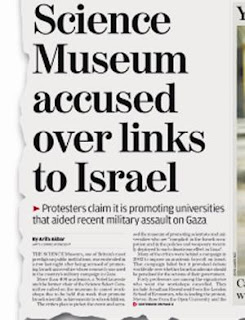 The cancellation call and claims that Israeli universities are "complicit" in the occupation of Palestinian territories and this year's "disastrous" offensive in Gaza, reported in The Independent yesterday.....

The British academics, among them 40 professors, include many of those behind the eventually unsuccessful campaign to impose a full-scale boycott of Israeli academics. The "educational seminars" – in Manchester yesterday and at the Science Museum in London tomorrow – are being run by the UK Zionist Federation....."
Posted by Tony at 3:25 AM