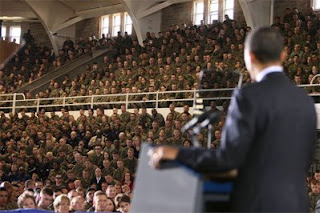 "Combat troops are to be pulled out of Iraq by August 2010, President Obama said, but some 50,000 occupation troops will remain behind. Someone should let the Iraqis know the distinction.....

I could live with the prolonged injustice of the occupation in Iraq if I thought there would really be peace, that we could then help rebuild the country we destroyed and that we had restored the rule of law by rejecting the Bush doctrine of pre-emptive war, something that under post-Nuremberg laws is defined as a criminal “war of aggression.” I could live with 19 months more of the war if I knew it would really be the end. But the war in Iraq, like Afghanistan, will go on. Our imperial projects and killing will continue under the Obama presidency. Many more, including some of our own, will die.

The only hope now lies in renewed protests against the war and a reinvigorated anti-war movement. This time the movement should hold fast, as stalwarts like Cindy Sheehan, Cynthia McKinney and Ralph Nader have, to the moral imperative of peace and not the false hopes offered by the Democrats. They cannot be trusted. Politics is a game of pressure. Abandon that pressure and you lose."
Posted by Tony at 6:15 AM