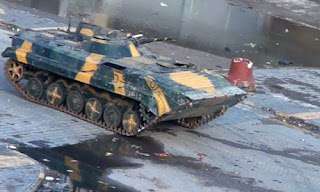 "Tens of thousands of Syrian demonstrators took to the streets of Homs during a visit by Arab League monitors, to protest against alleged mass killings of civilians and prevent what some warned would be a whitewash inspection.

Syrian security fired teargas into the crowd, which the British-based Syrian Observatory for Human Rights claimed was 70,000 strong, as it approached the centre of the restive city.

The army appeared to withdraw some tanks from Homs hours before the Arab League visit, after pounding rebel districts the previous day. But opposition activists alleged that many tanks had been hidden in government facilities for the visit and that snipers were opening fire on people trying to recover bodies from ruined buildings.

The protesters appeared determined to show the Arab League observers the scale of the damage to residential neighbourhoods, concerned that the inspection could be stage-managed by the government. The Syrian National Council (SNC), the main umbrella group of opponents to President Bashar al-Assad, said the observers were "being held prisoners by the Syrian system"...... "
Posted by Tony at 5:03 PM