The Bahrain Uprising in Numbers 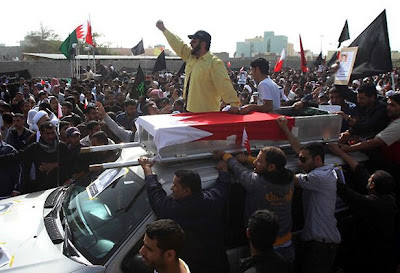 Percentage of citizens who are Shia Muslim: 70

Percentage of those in government: 13
....
Of the 1,000 National Security Apparatus employees, percentage who are non-Bahraini: 64

Percentage who are Shia Bahraini: less than 5
.....
Day pro-democracy protests began in Bahrain as part of the Arab Spring: Feb. 14, 2011

Fatalities as a result of tear gas shot into residential homes or birdshot fired at close range: 30

Days left in power: numbered"
Posted by Tony at 6:49 AM