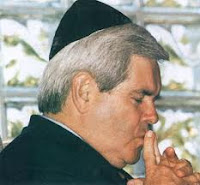 Senior political analyst explains why Newt Gingrich is no Tom Cruise, and why touting Israel is a mission impossible.
By Marwan Bishara
Al-Jazeera
".....One mission too many
Generally speaking, the pro-Israeli adage and sound-bites are the brainchild of Israel lobbyists and Republican like Frank Luntz.But even Luntz has warned: "Don’t pretend that Israel is without mistakes or fault. It’s not true and no one believes it".In his how-to-market-Israel guide, he adds, "We’re at a time in history when Jews in general (and Israelis in particular) are no longer perceived as the persecuted people. In fact, among American and European audiences -sophisticated, educated, opinionated, non-Jewish audiences - Israelis are often seen as the occupiers and the aggressors. With that kind of baggage, it is critical that messages from the pro-Israel spokespeople not come across as supercilious or condescending."Tell that to the Republican candidates.
Defending the Israel right-wing coalition in the Western public sphere is becoming "mission impossible" with "the thrills and fun are quite few and far between".
This past week provided an excellent example. Hamas leader Khalid Masha’al reconciles with President Mahmoud Abbas, accepts a Palestinian state on the 1967 borders, and adopts popular non-violent resistance while Israel’s military Chief of Staff Benny Gantz warned that Israel will attack Hamas controlled Gaza 'sooner or later' while his government announced the construction of new illegal settlements in the West Bank.
But those presidential candidates, desperate for the organizational, media and financial support of the Israel Lobby, are not concerned with any of any such developments. They will "love Israel to death", literally the death of Palestinians or Israelis.
That starts with "increasing all strategic aid in all forms" to "moving our embassy from Tel Aviv to Jerusalem", moves through denying Palestinian human and national rights, and ends with threats of bombing Iran.
The comedy of "outloving" Israel was best captured by US comedian Jon Stewart who graded Republican presidential candidates statements on Israel according to a Yarmulkometer."
Posted by Tony at 3:33 AM