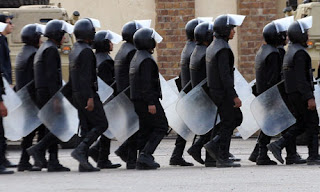 "Egyptian security forces have launched raids on a series of high-profile human rights and pro-democracy organisations based in Cairo, including the US National Democratic Institute, founded by former secretary of state Madeleine Albright, and the International Republican Institute.

During the raids riot police confined staff to their offices and forbid them from making phone calls. About half a dozen Egyptian and international groups were targeted as part of a widespread investigation into foreign funding of Egyptian civic society groups.

The raids on NDI and IRI, however, both of which have received US state department funding for their operations, will be bound to cause friction with the US government, which underwrites military aid to Egypt to the sum of $1.3bn (£843m) annually.

In recent months, the Supreme Council of the Armed Forces has accused local non-governmental organisations of receiving money from abroad, and has argued that the recent unrest in the country is by "foreign hands"......"
Posted by Tony at 7:22 AM