Egypt's raids on NGOs are about control 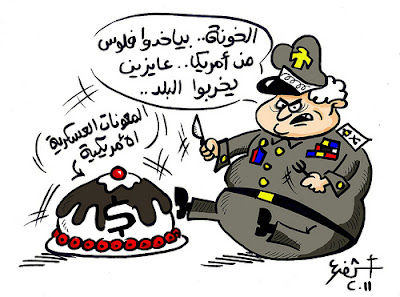 SCAF, while feasting on billions in US military support:"Those traitors who take US money want to ruin the country!"

"Imagine you live in Saudi Arabia and want to start a discussion group with some friends. The only way to do it legally is to ask the king's permission....

In most Arab states any sort of civil society organisation, even something as innocent as a youth group or stamp-collecting club, has to be registered with the authorities, and if the authorities don't like the sound of it they may refuse or simply ignore the request, leaving the applicants in a legal limbo.

In Bahrain and Oman they can refuse permission on the grounds that the organisation is unnecessary or, in Oman's case, "for any other reasons" decided upon by the ministry of social affairs. In Qatar, if a society wants to admit non-Qatari members it must ask the prime minister first.

The right of people to get together in pursuit of shared interests or purposes is one of the building blocks of freedom. Exercising that right is the essence of civil society activity, and you can't have a flourishing democracy without a flourishing civil society.

That is why authoritarian regimes are wary of NGOs and other civil society organisations, and why they seek to control or restrict them. Such activities are viewed as subversive because they undermine the idea that the authorities always know best. Even charitable work can be considered dangerous if it draws attention to the government's failure to provide basic services.....

In Syria, Jordan and Qatar (plus Egypt under Mubarak) the nation's charitable efforts are dominated by the ruler's wife....

Viewed in this context, the raiding of NGO offices in Egypt on Thursday is not especially surprising – though, of course, one of the main goals of the revolution was to put an end to such dictatorial practices, and the raiding of 17 NGOs in a single day was unprecedented, even during the Mubarak years.....

It's a spurious argument. The idea that NGOs should not be funded from abroad holds no water at all when the Egyptian military themselves are perfectly happy to accept American taxpayers' money, and in fact depend on it. Since 1975, Egypt has received well over $50bn in US aid – much of it military. Against that, the $40m recently allocated by the US to promote democracy and human rights in Egypt is a drop in the ocean.

The real issue is not an objection to foreign money on principle. The Egyptian military want it and need it, but they also want to determine how it shall be spent. And they would rather have it spent on weapons than on irritating little NGOs that keep bleating about democracy and human rights."
Posted by Tony at 4:00 AM