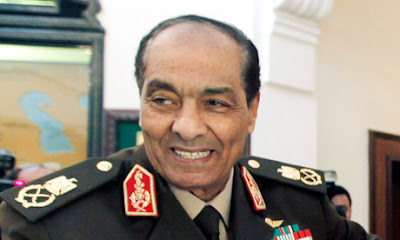 Virginity-Tester-In-Chief is Unhappy About the Court Order to End the Test!

"CAIRO: After a Cairo court ended the controversial virginity tests on Egyptian female activists by the military, the chief military judicial official Adel el-Morsy lashed out at the court order to suspend the practice.

He said in a statement that the court order “is not applicable because such a practice was never part of the military’s prison code,” continuing the military’s stance that the virginity tests never took place in the first place, despite a military official telling CNN last summer that they did in fact occur.

Samira Ibrahim, a victim of the tests, had filed a lawsuit against the military over the procedures, which she said were conducted in the open and in front of soldiers on March 9, after being detained by the country’s ruling military junta.

Morsy argued that if the “tests” had taken place, it “was only done as an individual act” and was not military policy.

He added that the person responsible for subjecting women to “virginity tests” would have to face criminal accountability, and that the “accused military doctor,” whose name has yet to be provided, “is currently being tried in front of the Supreme Military Court.”

The doctor’s case has been adjourned to January 3, Morsy added.

Earlier on Tuesday, the court, ruling on a lawsuit filed by victims Samira Ibrahim and Maha Mohamed in two separate cases, called for the immediate cessation of such practices at military facilities across the country.

The cases had been filed by Ibrahim with the assistance of lawyers from the Hisham Mubarak Law Center and the Nadim Center for the Rehabilitation of Victims of Torture.

Although dozens of young women were subjected to the tests on March 9, the 25-year-old Ibrahim is the only one who has spoken out about the incident and filed a lawsuit against the military rulers....."
Posted by Tony at 1:44 PM