Bonfire of the dictators 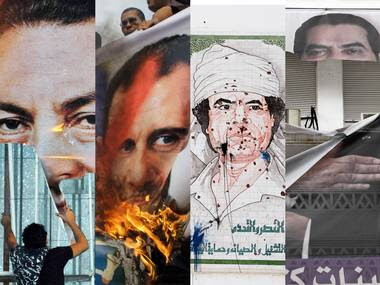 In the last part of our series, Robert Fisk ponders the fate of the despots who fought grimly against a revolutionary tide

"How come they lasted so long?

We are so keen to analyse the revolutions that tore the Middle East's dictatorships apart this year that we have forgotten the record of endurance of these vicious men and their sheer, dogged, ruthless power to survive.....

If the local Genghis Khan appears to be winning, and especially if he's got lots of oil, then you can militarily help the rebels by trying to kill your former ally. This is especially useful if you have previously slobbered all over him in your desire to steal his country's natural resources.

The Blair-Cameron Punch-and-Judy show with the author of the Green Book is a text-book example....

There is, of course, another pre-planned path for Western leaders: rage against oil-poor dictators who kill their fellow countrymen, but call for them to "step aside" rather than "step down" (Assad) if you or your local ally (Israel) fear that their replacement might prove a lot worse. If, on the other hand, they are immensely wealthy and also strategically useful (Bahrain), you may criticise them, but under no circumstances call for their overthrow. Ditto for Saudi Arabia and all the other glittering kingdoms of the Gulf.

And advice for both Arabs and the Western leaders who rule them by proxy. Be patient. The Bahrainis rose up too soon. The Egyptians rather late. But revolutions are often followed by counter-revolutions (Field-Marshal Tantawi and the Muslim Brotherhood versus the revolutionaries of Tahrir Square, for example, soon to be followed by Tantawi versus the Brotherhood) and they go on for a long, long time. We journalists like to have neat, date-packaged stories, to wrap up revolutions by edition times when in fact – oh, woe betide all editors – the Arab Awakening will continue long after we have died of old age.

So this is a column to cut out and keep over the next year. Read, learn and inwardly digest. And if you really can't make out right now whose side to support or desert, call for "both sides to exercise restraint" until you've made up your mind. Touche."
Posted by Tony at 4:37 AM