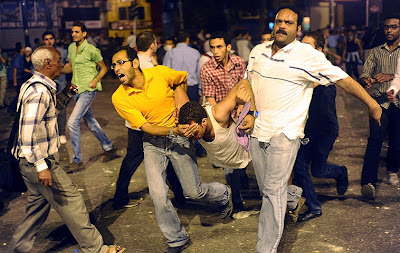 The announcement was met with widespread anger from activists who have long demanded justice against the police for shooting and killing protesters during the January and February uprising.

“It is another setback in our struggle to have our families receive justice for those who killed Egyptian citizens,” said Mohamed Radwan, the brother of a protester who was shot dead by police on February 2 of this year.

“This just shows we have returned to life under dictatorship,” he told Bikyamasr.com.

Explaining its ruling, the court said that the policemen had acted in self-defence [A term borrowed from the IOF] after they were attacked on January 28 in Cairo’s working-class district of al-Sayeda Zeinab, the television said....."
Posted by Tony at 11:20 AM