Palestinians in a 'Jewish state' 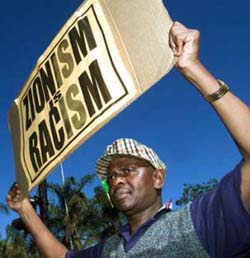 "Israel's crimes in the occupied Palestinian territories - like the settlements, the killing of civilians and the demolition of homes - are openly condemned in the West by human rights groups and others like never before. But as the peace process remains stuck, and Prime Minister Binyamin Netanyahu forces the issue of Israel as a "Jewish state" into the spotlight, understanding the situation of Palestinian citizens of Israel has become crucial to grasping the core of the entire conflict.

So-called "Israeli Arabs" have got it better than most Palestinians, who are either under military rule or forcibly excluded from their homeland. But the institutional discrimination they have faced since 1948 goes to the heart of the contradiction that Israel is "Jewish and democratic".

Many people will concede that the military occupation of non-citizens for over 40 years is undemocratic. Yet, inside the pre-1967 borders, Israel is far from the "liberal democracy" central to the propaganda, in areas like land, planning, housing, immigration and state budgets. Rhetoric and policies associated with the far-right in Europe - like an obsession with "demographics" and birth rates, or boosting one kind of population in a given area to counterbalance an "undesirable" minority - are mainstream in Israeli politics

In my new book, Palestinians in Israel: Segregation, Discrimination and Democracy, I unpack some of the core elements of how Israel's Palestinian citizens have been treated since 1948. One aspect is the area of nationality and citizenship rights, as this short extract explains......"
Posted by Tony at 3:56 AM