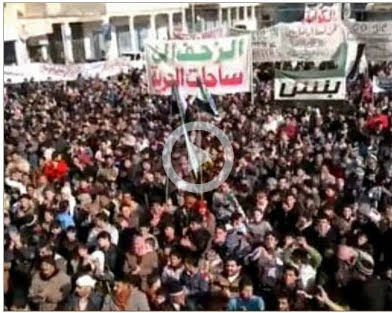 "The largest demonstrations in Syria since the summer have laid siege to parts of Damascus and most key towns and cities, emboldened by Arab League monitors whose presence appeared to provide protesters with cover from regime gunmen.

An estimated 500,000 people are thought to have taken to the streets across the country, with the largest and most defiant protests taking place in areas where the observers were present.

The touring members of the Arab League states could not stop the bloodshed, however, with opposition groups claiming up to 31 people were killed nationwide. Almost all deaths were reportedly in areas that the 60-man delegation is yet to visit.

At least four areas of Damascus and parts of Syria's second city, Aleppo, were occupied by large groups of demonstrators – a marked difference from the time when rallies only took place in the south and west of the country.

The main opposition group inside Syria, the Local Co-ordination Committees, claimed that 150,000 people were chanting in front of monitors in the capital, with security forces watching on.

The open defiance in the regime's power bases suggests that the support which President Bashar al-Assad had regularly boasted of in the capital may not be iron-clad. Opposition activists in Douma in northern Damascus said up to 24 protesters were wounded there by nail bombs thrown into the crowd.

Two key opposition cities, Deraa in the south, where the uprising began, and Homs near the Lebanese border, which has become the centre of the nine-month revolt, were heaving with demonstrators chanting anti-regime slogans and waving a national flag last flown before the Assad clan swept to power in Syria more than 40 years ago....."
Posted by Tony at 2:38 PM