Tahrir doctors: The military treated us like prisoners of war 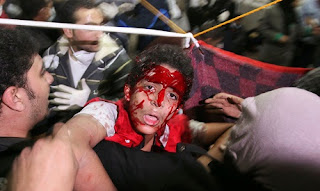 "The military police assaulted volunteer doctors working at the field hospital in Tahrir Square, doctors have said. The doctors say the military told them it was helping the wounded.

“The military police burnt our first aid kits,” said Dr. Mona Mina at a press conference on Sunday, adding that they were treating the doctors as if they were prisoners of war. “They must respect the international conventions that Egypt has signed in this regard.”

“The wounded have the right to medical treatment, even if they were thugs,” she said, refuting the army’s excuse for removing the make-shift clinics.

Dr. Karim Abdel Halim said the military police beat him with clubs and shocked him with taser guns. “And they took my mobile phone and my camera,” he said.

“I cannot believe I was beaten by the Egyptian army,” said Dr. Ahmed Hussein, while Dr. Ahmed Kolaib said the army sprayed the doctors and the demonstrators with a gas that causes paralysis and epilepsy. “They also targeted our eyes with their shotguns,” he said.
Dr. Abdallah al-Karbony demanded an apology from the ruling military council, and a promise not to assault doctors again while they are on duty."
Posted by Tony at 4:23 AM