Egypt: National and International Human Rights Organizations are Under Attack 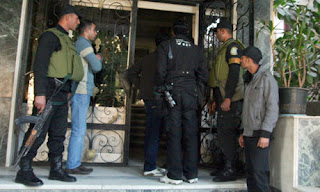 "......We strongly condemn the ongoing crackdown on NGOs in Egypt and view it as a way in which these organizations might face trumped-up charges linked with criminal offenses, in an attempt to provide a scapegoat to provide impunity for the SCAF and Egyptian authorities and to silence voices critical of ongoing human rights violations. These attacks constitute a severe violation of the right to Freedom of Association, as provided in Article 22 of the UN Covenant on Civil and Political Rights and fall within the general policies of the government of Egypt and the SCAF to undermine public freedoms in the Country. During the past 10 months of military rule, the SCAF has been accused of conducting activities hostile to human rights and fundamental freedoms: the SCAF has been accused of using live ammunition against peaceful protestors, torturing political detainees, and referring more than 12000 civilians to military trials. We call on the SCAF and the Egyptian government to immediately halt its attacks on the above-mentioned NGOs and to refrain from attacking additional NGOs in Egypt."

Asian Legal Resource Centre
Posted by Tony at 4:03 AM