The Yellow “Revolution” of Mahmoud Abbas and Mohammad Dahlan 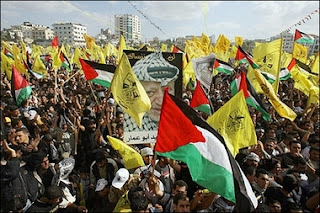 It has been a while since the last US-sponsored, color-coded “revolution.” But that does not mean that Elliott Abrams and Condoleezza Rice have stopped trying.

Just a few days ago, several trucks made their way into the Gaza Strip with the help of Israel. On board supposedly were food supplies for the starving population. However, upon inspection the cargo turned out to be 45,000 yellow Fatah flags and an equal number of baseball caps with Fatah logo on them and kafiyyahs to complement the ensemble.

Hamas could have confiscated these supplies, since it knew what they were intended for. But it decided to let Fatah receive the implements of what was intended as a yellow color-coded mass rally against Hamas. The occasion chosen was the third anniversary of Arafat’s death.

Two observations are in order. In the past two years, when Fatah controlled the Gaza Strip, nothing comparable was organized in Arafat’s memory. The other point is that this organized rally was much larger than any rallies in the West Bank, which Abbas and his cohorts still control.

To Hamas’ credit it gave permission to hold the rally, even though Hamas is totally forbidden from holding even a rally of two dozen people in the West Bank. When Hamas supporters attempted to organize a small protest in Al-Najah University in Nablus, they were beaten up by Abbas’ thugs, some were imprisoned and many expelled from the university.

The Gaza rally almost ended peacefully as was agreed upon with the police. But this was not the plan all along. The plan was to provoke Hamas and instigate violence, and this was what happened. A few supporters of the former Fatah warlords in Gaza opened fire on some of the civilians and on the Hamas security. The idea was to create chaos and to blame the killing on the Hamas police; classic USraeli tactics. Several Hamas policemen were injured and six or seven civilians were killed.

At this point it is important to step back and to look at the bigger picture instead of trading blame. In that bigger picture we see a level of collaboration between Abbas and his regime and the Israeli occupiers unprecedented in Palestinian history. We see a regime that has declared any Palestinian resistance to the occupation as illegal and has equated it with terrorism. We see a regime whose UN representative has been preparing a UN resolution which in effect would declare most Palestinians as terrorists and which would provide legal cover for Israel’s daily killings in Gaza and its threatened total invasion of the Gaza Strip.

The mendacity of this regime in Ramallah is that it uses Arafat’s memory to suit its own designs even though Arafat would never agree to the collusion of the regime and the Israeli occupiers and the total abandonment of Palestinian rights which the Ramallah regime is prepared to do in the Annapolis meeting. It is a cynical use of Arafat’s memory as a smokescreen to cover up the treason of Abbas and company.

What is even more contemptible is that the Abbas team, including Mohammad Dahlan, were involved in the poisoning of Arafat. The very same people who are shedding tears, erecting monuments and organizing rallies for Arafat, were those who worked to remove Arafat from the scene since he became an obstacle to USraeli plans to liquidate the Palestinian cause. It was none other than Dahlan who wrote a letter to Shaul Mofaz (Israel’s defense minister at the time) telling him to, “leave it to us to get rid of Arafat in our own way.” Dahlan received special training in Britain in handling small amounts of radio-active poison (most likely polonium) and how to introduce it in Arafat’s food. The poison is very slow acting and is very hard to detect.

Abbas, Dahlan and the rest of the gang, until this day, have prevented the medical report about Arafat’s death from being released.

If we look at the bigger picture we see that George W. Bush has personally demanded that Dahlan be in the Palestinian delegation to Annapolis. More importantly, he will be a pivotal player in subsequent “negotiations” on final issues. In other words he is most trusted by Bush and Israel to sacrifice all of the Major Palestinian rights from Jerusalem to the right of return, and the end of the occupation. It is not far fetched, and in keeping with the US tradition, to remove Abbas from the scene at a given point (polonium anyone?) and to install Dahlan as the Palestinian dictator-in-chief.

What is at stake for the Palestinian people is huge, and it is nothing less than the liquidation of their rights for which they have been fighting for 90 years. The level of collaboration and treason by the regime in Ramallah is unprecedented in Palestinian history, and the worst is to come.

Seeing this bigger picture and the real goals behind what is being fabricated should be the focus of most Palestinians. Let us not be distracted and sucked in a color-coded campaign of organized chaos, killing and revenge killing. Let us prove that we are more educated, intelligent and perceptive than to fall for this. If we fall in this trap, there will be no second chance and future generations will not forgive us such stupidity and shortsightedness.
Posted by Tony at 7:49 PM