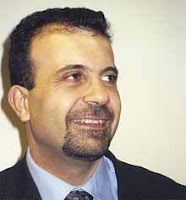 A Repost of a Very Relevant Article

"Before the United States government subcontracted the Chilean military to overthrow the democratically elected government of Salvador Allende in 1973, it carried out a number of important missions in the country in preparation for the coup of 11 September. These included major strikes, especially by truck owners, which crippled the economy, massive demonstrations that included middle-class housewives and children carrying pots and pans demanding food........

Whatever fig leaf still covered the Fateh leadership's complete collaboration and subservience to Israeli interests has now fallen off. As a result, there is very little left that can restrain Fateh's actions. The next few weeks will be decided by how much Fateh leaders are itching for a fight to save their skins and fortunes, and how much patience Hamas can muster in the face of so much thuggery. In the meantime, what has been unfolding in the Palestinian territories is nothing short of the Chilean script.

Pinochet is in Palestine. His success however remains far from certain. "
Posted by Tony at 8:51 AM