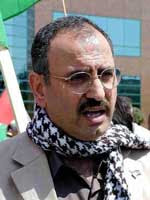 "For the last 20 years, the U.S. government has accused me of being a terrorist. Along with six other Palestinians and a Kenyan, we were dubbed the "Los Angeles Eight" by the media. Our case even made it to the U.S. Supreme Court.....

From the beginning, we said that our case was a political one and that the government made us victims of a political witch-hunt. We persevered all these years and defeated the attempt to uproot us from our communities, break our families apart, and deport us, because we were innocent. Free at last, we are finally exonerated and it tastes sweet. We will savor the sweetness. And we will use it to fuel our determination to defend the same issues that our supporters defended through us: justice, civil liberties, freedom and immigrant rights. We believe that this is the America for which we continually aspire, the America that is just, here at home and in faraway places - with policies based on fairness, equality, and a shared humanity. "
Posted by Tony at 9:42 AM