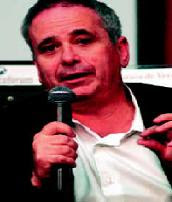 IP: I do not think we can reach a genuine and lasting peace if it is based on the idea that the Palestinians must make do with 22% of the land. First, there is not a single Israeli who wants to give the 22%, so we are talking about a 10% anyway. Second, I do not see how a normal nationalist movement would stop fighting if only 22% of its people were liberated. Either we are going towards a solution that is not national, but post-national, and in this case there is no need to create two societies. Moreover, if you look at the root of the problem, it is not only about land, it is also about dispossession, and without the right of return of refugees it will be very difficult to say that the conflict has been settled.......

Question: You said that the "substitution of peace for a 'peace process' has become the main strategy of the Israeli peace camp" ...

IP: Since 1948, the political elite in Israel wants to be part of the West, and has to navigate between two waters: maintaining an ethnic and racist state on the one hand and, on the other hand show abroad the image of being a democratic state. Of course the two are incompatible. One way to do this is to remain constantly engaged in a peace process, because in this way can tell people in the West: "Yes, we have occupation, dispossession, discrimination, but because of the conflict. All this will end when the conflict ends," but they do not want to end the conflict because it is the way they can survive is the way to eject the Palestinians from Palestine. The process is carried out for the sake of the process, not to achieve a solution......."
Posted by Tony at 7:00 AM