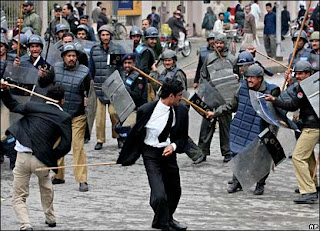 Where are the Demonstrations?

"One of the most noticed photographs in the newspapers last week was that of a well-dressed Pakistani lawyer on the streets hurling back a tear gas canister toward the soldiers who were suppressing a demonstration by lawyers protesting the martial law (called "emergency rule") of Gen. Pervez Musharraf.

Can anyone remember anywhere in all of modern history, large numbers of lawyers leading the resistance as they did on the streets of Pakistani cities way ahead of the workers, peasants and even the university students?

Pakistani police and troops rounded up the mass protests of lawyers and pushed hundreds of them into trucks on the way to the prison. Lawyers were willing to go to prison and endure beatings, while demanding the re-establishment of the rule of law and the independence of judges right up to the Supreme Court, a rare display of professional courage and duty.

What about lawyers in the United States standing up to the Bush regime's regular violation of our Constitution, the imprisonment of thousands of people without charges and without attorneys, the assault on due process, probable cause, habeas corpus, the spying on Americans without court approval and the defiant, illegal use of torture?

No demonstrations yet. No resolutions by bar associations saying that Bush and Cheney should resign or be impeached......"
Posted by Tony at 12:16 PM