That is All the Palestinians Need, A Palestinian Billionaire to Lead Them! 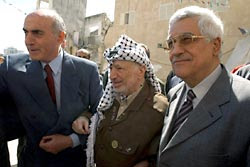 Fatah dominated Palestinian politics for decades, but failed to reform or clean up its corrupt image, even after a painful loss to Hamas in parliament elections nearly two years ago.

Billionaire businessman Munib al-Masri, 73, inaugurated his Palestine Forum with meetings in Ramallah and Gaza, linked by video conference. Supporters said he would convert the new group into a political party and field candidates in the next Palestinian election. No date for an election has been set....."