An uprising may be the only way to dislodge the general 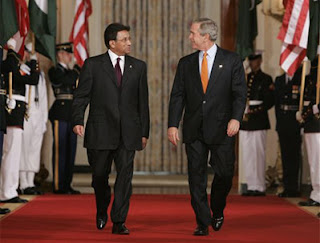 Benazir Bhutto is back at the head of a struggle against dictatorship, but Pakistan needs a more radical transformation

".....A decade on, she is the darling of the western media once more, leading the opposition to another US-backed military ruler and somehow, at the same time, the last hope of the US and British governments of keeping a grip on the upheaval now engulfing Pakistan. As she was told by a senior US official at her lowest point in the late 1990s: "We can whitewash you in 24 hours if we need to."......

But this is certainly not what the US had in mind for so pivotal a state in its "war on terror". The Bush administration's calls on Musharraf to abandon his dictatorial ways and press ahead with free elections clearly lack all credibility. Not only has the US been Musharraf's principal backer throughout, channelling nearly $11bn-worth of aid to his regime since 2001, but it is also widely accepted that any genuine withdrawal of US support would finish the general off in short order. No wonder Bush has sent his former ambassador in Iraq, John Negroponte, to try to knock his clients' heads together......

Wajid Shamsul Hasan, Pakistan's former high commissioner in London and longtime Bhutto confidant, said yesterday he believed Musharraf would be gone within a week. If so, Bhutto and the other traditional political leaders will struggle to meet the pent-up demand for change they will inherit, and the extent of her commitments to the US will be put to the test. For all her rhetoric about fighting extremism, for example, there is no reason to imagine that a Bhutto-led civilian government will make any more headway than Musharraf in the unpopular military campaign he is waging for the US in the Talibanised tribal areas. However, if Hasan proves over-optimistic and Musharraf digs in with American support, the possibility of a wider popular uprising is likely to grow - and with it, the chance of real and necessary political change."
Posted by Tony at 4:48 AM