Ramon: Recognition of a "Jewish state" important as it means no right of return 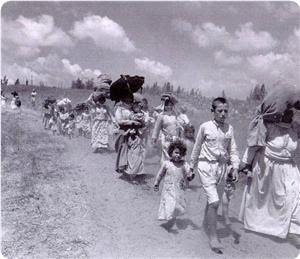 "NAZARETH, (PIC)-- Israeli vice Premier Haim Ramon stressed that Palestinian recognition of Israel as a "Jewish state" is important as it means dropping the right of return of millions of refugees who were uprooted from their homes and land sixty years ago.

The PA presidency and the unconstitutional government of Fayyad are calling for negotiating the Palestinian refugee problem and resolving it in a "just and agreed upon manner," without a mention of the right of return in accordance with natural rights and UN resolutions.

This has stirred fears in the Palestinian street that the PA President and his unconstitutional government are on their way to giving up the right of millions of Palestinian refugees to return to their homes and land. If they do, the majority of Palestinians would condemn them."
Posted by Tony at 2:10 PM