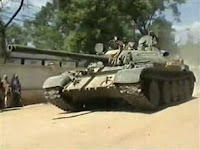 ".....AMY GOODMAN: While the situation in Pakistan is front-page news in the US, across the world, as well, the media has focused little attention on a much more dire humanitarian crisis. In Somalia, at least eighty people have died in the capital of Mogadishu in heavy fighting between US-backed Ethiopian troops and Somali fighters. Most of the dead are believed to be civilians. Ethiopian tanks and artillery battered parts of Mogadishu after an Ethiopian soldier was dragged through the streets. Residents of Mogadishu accused Ethiopian troops of attacking civilians.

ASHA GULED: [translated] We are witnesses to the problems the Ethiopian troops brought for us. They killed every person they saw in the area, and we have now decided to flee the capital, Mogadishu.

AMY GOODMAN: The UN estimates 100,000 people have left Mogadishu in the last two weeks to escape the fighting. UN Secretary-General Ban Ki-moon said one-and-a-half million Somalis are now in need of humanitarian assistance. Human Rights Watch says the failure of the international community to end the violence in Somalia reflects a contempt for the value of African life. Meanwhile, UN Humanitarian Coordinator Eric Larouche issued a grave warning about the humanitarian situation......

AMY GOODMAN: The US-backed Somali government has also launched an attack on the media. On Monday, authorities closed Shabelle Radio and briefly detained two of its senior staff. On Tuesday, heavily armed troops raided Radio Banadir. Eight local reporters have been killed in the line of duty in Somalia this year.

Salim Lone is a columnist for the Daily Nation in Kenya, a former spokesperson for the UN mission in Iraq. He has been closely following the situation in Somalia, joining us on the line from Nairobi......

SALIM LONE: Well, let's begin, Amy, first, talk about the [inaudible] of Somalia, because the world just does not seem to be interested. You just read out a horrendous list of terrible events and massacres and, you know, violations of human rights, war against -- I mean, crimes against humanity. And yet, this is not news either for the newspapers or the TV or even for Western leaders, who are completely silent. They’re unable to see that the situation has spiraled completely out of control.

And this government, that had been put in there with Western support, it’s comprehensively been defeated. It is only surviving by intimidating and killing scores and scores of people. 400,000 refugees, displaced people, in the last fifteen years, the worst years everybody thought, and then 450,000 more refugees in the last few months, and this as a result of a war waged by the United States and Ethiopia.

And increasingly -- on a smaller scale, obviously, but increasingly -- the situation is beginning to resemble Iraq. You mentioned the soldier dragged through the streets, desecrated, and the resulting massacre of so many innocent people, including an entire family of ten people, although one child is gravely injured but not dead. The same thing happened in Fallujah, that one terrible desecration by a few militants led to the killing of hundreds. We have, as in Iraq, in Somalia now IEDs. We have mortar rounds being launched on government and other forces. And we have mass civilian casualties. It’s only these mass suicide bombings that are to come.

And the world is completely silent. The government has tried everything, from the bombing of civilians in hospitals, killing journalists -- I think it should be clear: this government has killed journalists, not that ten journalists have died. Some of them, or even many of them, have actually been killed by the government. And yesterday, it closed the largest independent media house in Somalia, Shabelle Networks. So this situation has to be arrested somehow, and it can only be arrested by the international community......"
Posted by Tony at 10:41 AM