The dollar's decline: from symbol of hegemony to shunned currency 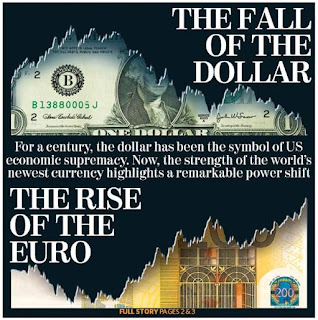 "The decline of the dollar, symbol of US global hegemony for the best part of a century, may have become so entrenched that some experts now fear it is irreversible.

After months of huge and sustained turmoil on the money markets, lack of confidence in the world's totemic currency has become so widespread that an increasing number of international traders are transferring their wealth to stronger currencies such as the euro, which recently hit its highest level against the dollar......

Warren Buffet, who is reputedly the richest man in the world, was asked on the US network CNBC last month what he thought was the best currency in the world to own now. He answered: "Not the US dollar."......"

However, America's Arab puppets are still hanging on to the dollar. They are the loyal puppets and world class fools. See what Saud Al-Faisal said, when the microphone was not supposed to be turned on, a couple of posts below.
Posted by Tony at 5:56 AM