Benazir vs. Musharraf is Punch vs. Judy 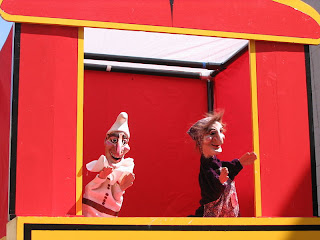 "Shlent was the marvelous onomatopoeic term we used in my student activist days, as verb or noun, to describe the stage managing of an event or process in a manner that allowed its appearance to camouflage a power play. (The sound shlent to me always evoked heavy pieces falling smoothly into place.) And I can think of no better term to describe the bogus “showdown” we’re being sold involving Pakistan’s General Pervez Musharraf and former Prime Minister Benazir Bhutto. In fact, appearances aside (although they camouflage very little), it’s plain that Bhutto and Musharraf are still involved in an elaborate U.S.-brokered negotiation process to divide the spoils of power in what might be called Pakistan’s Team America. Musharraf’s police may periodically prevent her from leaving her house, but they’re largely doing her the favor of providing her an excuse for refraining from leading her supporters in confrontation with the regime......

.......It’s probably no coincidence that Pakistan’s most sustained period of civilian rule came during the 1990s, when the Cold War was over and the U.S. simply had no need for Pakistan or interest in its domestic affairs. The fact that the civilian leadership in this period, both Benazir Bhutto and Nawaz Sharif, was not only incompetent, but also incorrigibly kleptocratic is not a result of U.S. agendas. It may simply be a by-product of decades of authoritarian rule — and Pakistan’s military, itself, is said to own about a third of the economy. Musharraf’s overthrow of Nawaz Sharif was greeted with a shrug in Washington. It was only after 9/11 that Pakistan came back in fashion, and with it the idea of Musharraf as an “indispensable” ally. Yes, it may be true that the extremists that threaten the U.S. also threaten Musharraf. But not in the same way. And nor is that likely to make Musharraf follow the U.S. agenda, for the simple reason that he’s well aware that most Pakistanis take a dim view of Washington’s “war on terror.”......"
Posted by Tony at 5:04 AM