Spain: The Monarchy's clash with Socialism 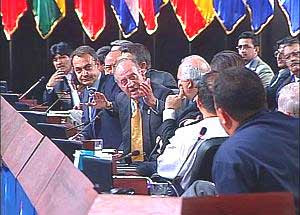 "On August the 1st 1969, Time magazine quoted Generalissimo Francisco Franco saying; "Conscious of my responsibility before God and history and taking into account the qualities to be found in the person of Prince Juan Carlos of Borbón, who has been perfectly trained to take up the high mission to which he might be called, I have decided to propose him to the nation as my successor." With this statement began the formal relationship between Spain's present king and the country's fascist dictator.

In November 2007 at the Ibero-American Summit in Santiago de Chile, the King of Spain Juan Carlos pointed his finger at Venezuelan President Hugo Chávez and asked him, "Why don't you shut up?", after Chávez had called José María Aznar Spain's former Prime Minister a fascist, and José Luis Rodríguez Zapatero the current Spanish Prime Minister was trying to defend him.......

So, although under the leadership of King Juan Carlos, Spain did formally complete its transition from dictatorship to democracy with the Spanish Constitution of 1978, leaving in place a constitutional monarchy, it would be hard to believe that someone who swore loyalty to a brutal fascist would have no animosity to such ideals. For this reason as a Spaniard, it is disappointing for me to see how people around the world receive the media sound bites regarding the heated exchange between a King and a president, without being granted the opportunity to understand the historical events which lead to such a situation. Both Aznar and the King of Spain have embraced fascism at some point in their lives and have built their power upon its foundations, so although one today would struggle to openly proof the statement that they are currently fascists, it can at least be said of them, that at one point both of them certainly were......."
Posted by Tony at 7:51 AM