Dr. Mona El-Farra in Gaza: what was going inside thier tiny heads ?i wander 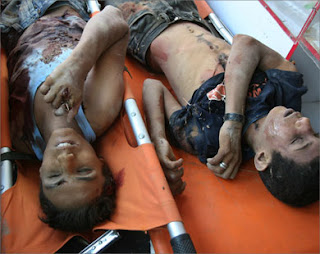 I don’t know exactly, what was going, inside the little heads, of the kids who were preparatory school children, of Al Buriege boys preparatory school
But the two tiny bodies were shot ,with many bullets, as I was told by my colleagues of the ER at the AlAqsa hospital.
Life of kids in Gaza is very intolerable, poverty, violence. Lack of security no entertainments, in simple one sentence, LACK OF NORMAL LIFE UNDER OCCUPATION AND INSIDE THE REFUGEE CAMP, populatiion of Gaza is 1.4 million 60%are children under 17 years old , two thirds are refugees .
On that day,when the dreams of two tiny kids has stoped forever ,
The two boys were very close to the fence that separate Gaza from Israel , they were very close, and for sure , they were very obvious to the soldiers, inside the Israeli supervising military tower , those soldiers are equipped with highly sophisticated binoculars and high tec ways ,that enables them to see 2 boys playing by the fence , in a green meadow , I don’t know aim not sure if they were playing, or trying to cross the border to the other world outside the big prison
.I don’t know what was going inside the tiny heads of 2 skinny dreaming .Palestinian boys by the borders,
Their sad adventure turned into tragic death, by soldiers who know for sure very well how to distinguish, between militia men and kids,
The soldiers as well as the boys are victims of occupation, the occupation that deprives the soldiers of their humanity, when under the false pretence of Israel security; daily crimes are committed in my country. And against my people."
Posted by Tony at 10:52 AM