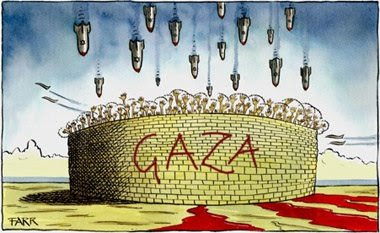 (Cartoon by Simon Farr)
Silently, the world watches. And silently, governments plotted: how shall we make the clouds rain death on to Gaza?

""There is a complete blackout in Gaza now. The streets are as still as death."

I am speaking to my father, Moussa el-Haddad, a retired physician who lives in Gaza City, on Skype, from Durham, North Carolina in the United States, where I have been since mid 2006 – the month Gaza's borders were hermetically sealed by Israel, and the blockade of the occupied territory further enforced......

My father takes a deep restorative sigh, before continuing. "Ehud Barak has gone crazy. He's gone crazy. He is bombing everywhere and everything … no one is safe.".....

The rains of death continue to fall in Gaza. And silently, the world watches. And silently, governments plotted: how shall we make the thunder and clouds rain death on to Gaza?.....

My friend Safah Joudeh is also in Gaza city. She is a 27-year-old freelance journalist.

"At this point we don't feel that it is Hamas being targeted, it's the entire population of Gaza," she says. "The strikes have been and I need to stress this, indiscriminate. They claim that the targets have been buildings and people that are Hamas-affiliated, but the employees in these buildings are public sector employees, not political activists … other targets include homes, mosques, the university, port, fishing boats, the fish market."

No one has left their home since Saturday, she says.

"The streets were full of people the first day of the attacks, naturally. They were unexpected and came at a time when people were going about their daily business. The streets have been completely empty the past two days. People have closed up shop and trying to stay close to their families and loved ones. Many homes are without bread, the bakeries stopped working two days before the attack because of lack of fuel and flour."......"
Posted by Tony at 4:31 AM